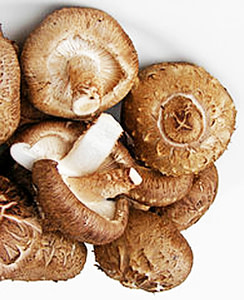 Once the active compounds are transferred to the oil, it is filtered, to remove the plant material. What’s left is pure, Organic Shiitake Mushroom Infusion Oil, which is rich in rare nutrients.

This Mushroom Extract Oil is made by one of the largest infusion producers in the U.S.A. so the quality is superb.

WHAT IS AN INFUSION OIL?

Some plant varieties do not contain sufficient oils to produce an Essential Oil or a Carrier Oil. When this is the case, the plant is infused / steeped / pressed, in a carrier oil.

Organic Sunflower Oil is used for infusing the plant, until it’s bio-active properties have permeated the oil thoroughly.

The Mushroom Infusion Oil can then be used as is, without the need for dilution. 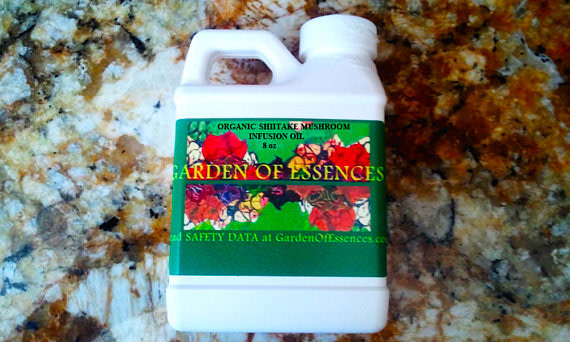 WHAT ARE THE SKIN BENEFITS OF SHIITAKE MUSHROOM?

The shiitake mushroom (Lentinus edodes) is an edible mushroom, native to East Asia, which is consumed in many Asian countries. It is considered a medicinal mushroom, in certain types of traditional medicine.

Out of thousands of species of mushrooms, Shiitake is the most studied medicinal mushroom of the Orient. Dried Shiitake Extract is known for its anti-cancer, anti-oxidant and antiviral properties.

Shiitake Mushroom Extract is now included in all the top greens powders supplements, in America, due to its superfood status, and its ability to enhance immunity.

The skin lightening effects of Mushroom extract are so powerful, that they are now being used in top skincare Companies, in the West.

If you have irritated, sensitive skin, be amazed that studies show that shiitake mushrooms are rich in compounds that reduce redness and calm irritated skin.

With a high, natural vitamin D content, shiitake extracts are also beneficial for those with psoriasis.

~ Kojic acid from shiitake, brightens skin by slowing the production of the enzyme responsible for melanin and dark spots.

~ If your skin tone is uneven, or if you have sun-related dark spots, mushroom extracts are a safe, natural way to brighten the skin, and fade sunspots and acne scars.

~ Shiitake mushrooms’ kojic acid, is renowned as a skin lightener, and is useful as a natural alternative to dangerous, and often toxic, chemical skin lighteners, such as hydroquinone, which has recently been linked to skin cancer, in people’s attempts at skin whitening, using dangerous hydroquinone.

~ Shiitake mushrooms have been used for skin lightening in Japan, Korea and China for centuries.

WHY ARE MUSHROOM EXTRACTS IN GREENS POWDERS? 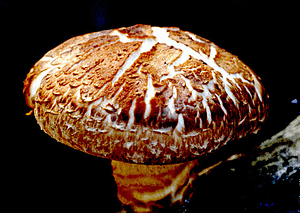 Have you noticed how all the top Greens Superfood Powders, include Shiitake Mushroom Extract. This is because it is a proven immune booster and a powerful antioxidant. These same benefits can be imparted to your skin, if applied topically:

Free radical activity, damages the skin, when there are environmental stressors, such as pollution, cigarette smoke, and toxic air.

Many scientists believe that it is the beta-glucan content of shiitake mushrooms, that offers its anti-aging skin benefits.

Organic Shiitake Mushroom Oil also achieves the mopping up of free radicals, thanks to the antioxidant L-ergothioneine, which helps prevent oxidative skin damage.

Some studies are suggesting that L-ergothioneine may be a new vitamin, with cell protective benefits.

The sun-dried form of Shiitake has the highest content of Vitamin D of any plant food. A scientific study has shown that vitamin D can be delivered through the skin.

Vitamin D is widely used in the treatment of various skin problems, like psoriasis, skin flaking and itching.

Recently, it has been found that Vitamin D is an antioxidant that is even more effective than Vitamin E.

Shiitake contains significant quantities of the Vitamin B: Thiamine, Riboflavin, and Niacin. Vitamin B has been shown to readily penetrate the stratum corneum, meaning that it gets deeply absorbed into the different skin layers, where it has anti-aging effects, such as improving the texture, and moisture retention of your skin.

Studies have shown that once Shiitake Mushroom infuses into Oil, it imparts Lentinan, a protein-free polysaccharide, which is used as an anti-cancer agent. However, we make no claims, and only wish to point to the powerful anti-mutation effects of this mushroom.

Usage: Spread it on clean skin, before serums and moisturizers. You only need a few drops, so a bottle of Garden of Essences Organic Mushroom Oil will last a long time.

Available at our satellite store on etsy, in different sizes, and coupon offers.