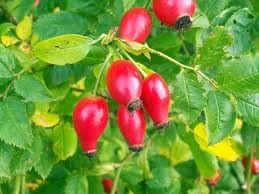 ROSEHIP OIL – extracted from the seeds of the rosehip fruit.

Rosehip Oil is well known for its role in:

This rose colored, unrefined oil retains all its healing properties, unlike the refined version.

Mends damaged hair, and adds a shine to dull hair.

May treat eczema and dermatitis.

I was honored to be featured on Mama’s Latinas, in which I was quoted as saying:

Most oils are too oily for cleansing, including the much touted coconut oil,” says Janice Rosenthal, a certified massage therapist and lecturer in holistic living. “The reason why rose hip oil works perfectly as a cleanser is because it’s one of the few oils known to leave no oily residue, while simultaneously providing a mild exfoliation.” It’s lightweight enough to not clog pores but moisturizing enough to not leave skin dried out.“

What are some of the vitamins and nutrients Rosehip Oil contains?

Rose Hip Oil contains provitamin A, mostly in the form of beta-Carotene. This is how it protects against UV damage, and slows down the major signs of aging.

The other form of Vitamin A it contains, is in the form of trans-retinoic acid, which is a natural version of Retin-A, (marketed as Tretinoin) and this accounts for the scar reduction results, as fibroblasts are stimulated in the skin. This natural ‘Retin-A’ also causes a reduction in the depth of wrinkles, but without the side effects of synthetic Retin-A, which could be skin peeling, redness, and hyper-pigmentation from going in the sun.

Yes, but as with all oils, cold pressed and organic is far superior, and always safer, as no toxic chemicals are introduced at any stage. Internal use: – 1 teaspoon in the morning on an empty stomach, and 1 teaspoon in the evening before bedtime. Or pour it unheated over your food.

Why is Rosehip Oil good for the cleansing the skin?

People think that this new fashion of oil cleansing, is for those of us with dry skin. Its not. Oil cleansing arose, when people became tired of washing their faces with glorified detergent. Detergent face wash strips your natural oils, leaving your skin vulnerable to acne and wrinkles alike.

The concept of oil cleansing makes sense, as the skin contains a lipid (oil) barrier, which should never be disturbed. Instead, you want to simply remove the build up of dirt on your face, and this is done by applying oil, then wiping it off with warm water.

Most oils are too ‘oily’ for this cleansing purpose, including the much touted coconut oil. The reason why Rose Hip Oil is perfect as a cleanser, is that it is one of the few oils known to leave no oily residue, while simultaneously providing a mild exfoliation, if you leave it on for at least 30 minutes.

Why is Rosehip Oil good as a moisturizer?

Rose Hip Oil leaves no oily residue, once it has sunk in, which makes it a natural serum. Serums normally sell for many times the price of Rose Hip Oil. What is a serum? It is a substance derived from an oil, which has been processed in a lab, having vitamins and herbal extracts added to it. It is finer than a cream moisturizer, and therefore penetrates the dermal layer far more deeply.

How is Rosehip Oil anti-aging?

Many high end moisturizers contain Vitamins A, E, some form of Retin -A, and Essential Fatty Acids. Rose Hip Oil already contains these, but in a more useable form, as each ingredient is in its original state, unlike the synthetic vitamins which are added to moisturizers.

How does it help to heal burns and scars?

Many scientific studies have sought to determine how exactly Rose Hip Oil achieves the flattening of scars, and the healing of burns. Their results are conclusive on the facts that:

How does Rosehip Oil work to even skin?

Evening skin tone means lightening areas of brown pigmentation. Rose Hip Oil achieves this via the Vitamin A it contains, which is in the form of trans-retinoic acid. This acid gently peels off any rough, damaged, or pigmented tissue.

The unique Vitamin E spectrum, plus Essential Fatty acids of linoleic and linolenic acid, then soothe and smooth the peeled skin, penetrating deeper, due to the exfoliating effect of the trans-retinoic acid.

What are some of its other beauty benefits?

You would think that Rose Hip Oil’s ability to flatten scars and wrinkles, heal burns, and lighten brown marks, would be enough. In addition to all that, it is reputed to also heal acne, acne scaring, radiation damage, dermatitis, and rashes. Once again, this is due to its unique properties, as mentioned above.

Is Rose Hip Oil good for the hair?

This fine oil is a natural scalp serum. That means that, for the best long term results, use it to massage into the scalp, then rinse off after an hour, or leave in overnight. Do this daily, or at least twice a week. The unique vitamins and fatty acids, will penetrate the scalp to the region where new hair cells are made.

Expect results such as a reduction in hair loss, and a glossier head of hair.

Why is it so popular among the Latina community?

Rose Hip Oil is extracted from the seeds of a rose plant which grows wild in Chile.  The oil has been used by native people in Chile for centuries, and has only been validated by scientists fairly recently.

In 1983, when the University of Santiago conducted research on people with extensive facial scarring, acne scarring, UV damage, radiation damage, burn scars, premature aging, and dermatitis, to name a few.

Rose Hip Oil was applied, and found to reverse the above conditions dramatically.

It should be noted that a minimum of one month’s application, 2 to 3 times a day, is necessary to see results, as the skin’s cell turnover occurs after one month.

In people over 40, this could extend to 2 months, and in more mature people, 3 months application would be necessary, to see the final results.

Rosehip Oil has been around for years, why is it suddenly becoming popular again?

Rose Hip Oil has become popular, due to many scientific studies having been conducted, like the one above. Add to that, the speed at which good news spreads within social media, and you can see why Rose Hip Oil is the new Coconut Oil.

Rose Hip Oil has recently appeared as an ingredient in dozens of high end facial serums and creams, and has thus gained the trust of the public, and rightly so.

Also available in a variety of discount sizes at our store on on Etsy.