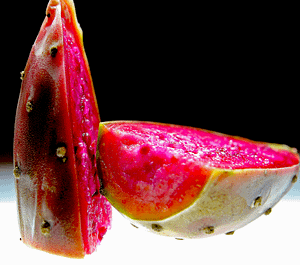 Prickly Pear Oil contains 150% of the Vitamin E found in Argan oil, and this is why high end cosmetics companies are including it in their anti-aging formulas, and calling it “the new Argan Oil.”

No thorns are involved in the extraction process, (in the same way that aloe vera extraction never involves the thorns.) The thorns are removed, then the seeds are cold pressed to extract the oil.

WHAT ARE THE BENEFITS OF PRICKLY PEAR SEED OIL?

The production of Prickly Pear Seed Oil is a labor intensive, and an extremely lengthy process.
The Prickly Pear seeds are separated from the pulp, and then dried.
The seeds are then cold pressed, to extract the oil, yet keep all the nutrients.
Each seed contains only 5% of oil, so it takes a half a ton of fruit, to make just one liter of Prickly Pear oil!

This wild fig oil is a potent antioxidant, because it contains three kinds of Vitamin E: Alpha (á-), Beta (â-) and Sigma (ä-). which are all potent forms of Vitamin E Tocopherols.
Thus Prickly Pear Oil contains a far superior version of store-bought Vitamin E, which usually only contains one kind of Vitamin E, and is often synthetic.

Prickly Pear Oil is high in phytosterols, which encourages new collagen production in the deeper layers of the skin. Thus, researchers have suggested that phytosterols can reverse the effects of aging

It has been reported by many, to have benefits that are greatly superior to those offered by Argan Oil. Prickly Pear contains the most Vitamin E of any beauty oil on the market (150 % more than Argan Oil). 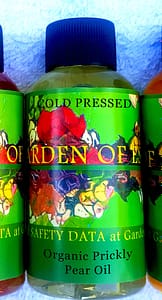 Prickly Pear Oil is high in carotenoids, Vitamins C and E, and flavonoids, which makes this skin-toning oil truly a powerhouse of antioxidants.

Another reason some people prefer Prickly Pear Oil to Argan Oil, is that its nutritional profile is very similar, yet it is almost odorless, when compared to the strong smell of Argan Oil.

Prickly Pear Oil has the highest percentage of unsaturated fatty acids of all oils (88 %), and contains up to 70% linoleic acid, one of the highest in existence, making it a potent anti-inflammatory, and emollient for mature skin. It has a thorough absorption rate, and leaves the skin feeling silky and hydrated, without an oily feeling.

Prickly Pear Oil has become the anti-aging serum for 2016 – 2017, for mature skin, or for anyone trying to prevent wrinkles, dry skin, and lines. And it is marketed specifically for those with sensitive skin.

~Add FIFTEEN DROPS of essential oil, per 50 ml of carrier oil, for body use, or hair use.

~Add TWO to THREE DROPS of essential oil, per 50 ml of carrier oil, for facial use.

Organic Prickly Pear Seed Oil is not only a gift for skin, but it also deeply moisturizes dry, damaged hair, and restores the moisture levels of nails and cuticles.

1) Organic, Cold Pressed, Undiluted, Prickly Pear Oil – This oil has been lightly Refined, by being put through a charcoal filter, which is similar to a water purifier filter. This removes strong aromas, bright colors, and sediment.

No heat, bleach, or chemicals, are applied, during the refining process, so that the oil retains its beneficial nutrients.

All our oils are fresh and bottled daily. Expiration date is at least 12 months from sale date.