What’s the difference between reflexology and simple foot massage?

Foot massage manipulates the muscles and joints of the foot, for the purpose of relieving tension and pain in the feet, by increasing blood flow to muscles, which allows stagnant waste products such a lactic acid, to be removed, thus reducing stiffness.

Reflexology, however, manipulates trigger points on the feet , which correspond to different parts of the body. For example, performing fine pressure point therapy on the big toes, can relieve a headache.

Every part of the body has a reflex point in the foot. A complete reflexology treatment takes an hour, during which every section of the foot, is subtly pumped, in a on-off, snake-like movement, performed by the thumbs and index fingers.

Manipulating trigger points, stimulates nerve endings in the feet, which lead to the corresponding nerve pathways in the body. The reflexology technique is thus designed to stimulate nerves, rather than muscles, and this is why the on-off pressure originated, because nerve impulses flow in an on-off, pulsing rhythm.

Below is a simplified chart of the corresponding reflex points, but please note that the full charts are far more complex. 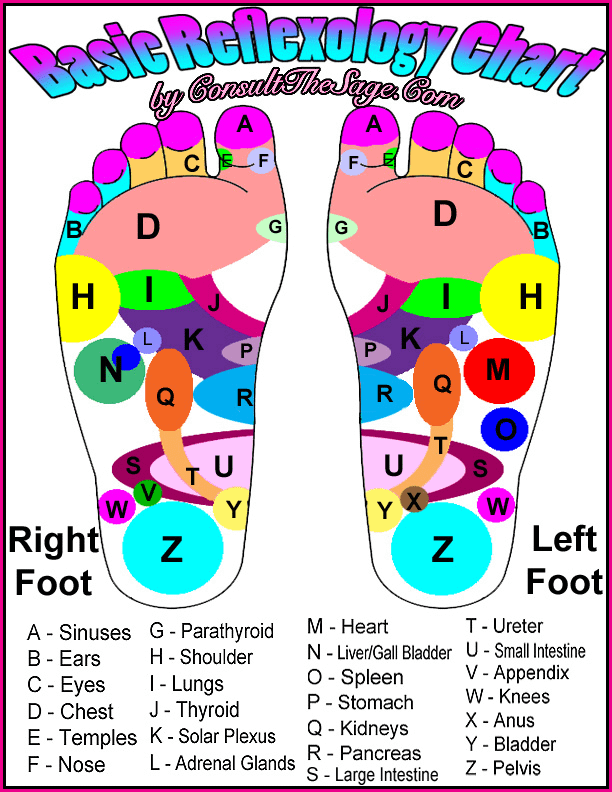 What are the benefits of reflexology?

Reflexology can relieve pain and tension in any area of the body, without ever needing to touch that part of the body.

This is particularly helpful in situations, in which massage is contraindicated. A good example of this would be, if a person had a spinal injury or a slippage of a spinal disc, in which massage of the back, would worsen the condition, or be too risky to perform, then reflexology could help to relieve pressure on the spine, without ever touching the spine.

Another example is in the case of inner organ problems, such as a kidney infection, or nausea of the liver. As it is impossible to massage the inner organs, reflexology can then stimulate those organs dramatically, and thus speed the healing process.

I have treated a woman in excruciating pain from a kidney stone, and seen her pass the stone, after one hour of reflexology.

I treated a woman who had extreme referred sciatica for half a year, to the point that she had not been able to make love during that time, and after only a few reflexology sessions, she was making love again, and was pain free.

What are the precautions to reflexology or foot massage?

The only time that reflexology should be avoided, is when the foot itself is injured.

Other than that, there are really no contraindications to reflexology. However, if one is treating a client with a more serious condition, it would be a good idea to obtain a letter from their doctor, saying that they have no medical objections to the patient receiving a series of reflexology sessions. That way, if the patient presents with new symptoms, the reflexologist cannot be held liable.

What are the benefits of reflexology for your body?

Many people have ‘maintenance’ reflexology sessions, even though they may not have anything specifically wrong with them. This is because reflexology puts the body in a state of homeostasis, which means, that it balances all the physiological systems of the body, much in the same way that regular exercise does.

One example of a benefit from regular sessions, is that the gall bladder will produce more bile, which will then break up fats more efficiently.

Another benefit is that the kidneys are stimulated, to the point that it is a common occurrence to have a client need to visit the restroom, mid-session, even though they went directly before the session.

Reflexology provides as many benefits to the body, as there are body ailments. After practicing reflexology for ten years, I have no doubt as to its efficacy. It is also an accurate diagnostic tool, meaning that should the reflexologist feel  a blockage in an area of the foot, then the client can be made aware that there is a problem in that area.

An example of this, is that I performed reflexology on a woman, who had the worst blockage I had ever felt, in her liver area. It was so bad, that I recommended that she have her liver tested at her doctor. She had liver tests done, immediately, and was found to have the early stages of jaundice, which, because it had been diagnosed so early, saved her from having a much more serious disease, with a longer recovery time.